This week on Spoonflower the theme is Art Deco. The designs will be viewed not as a flat picture of the design, but as a picture of a Double Bed in a Room, with your design on the duvet and and pillow cases.

I have done my design in several colours but I chose The White and Black on Silver as the one to enter into the contest.

There are other colours : Teal
Another on Burgundy:
Also Gold:
And on Black :

Yeah, Sane! Don't know if I'm deluding myself because actually what is sane?

Every Now and then I'll be sneaking in a bit about a challenge design I've done during my absence from this blog. I do apologise, to all the hundreds of viewers who were used to visiting, for just disappearing like that. I will do my best to not let it happen again.

HALLOWEEN .... Which will inevitably be happening later this year... is always a fun time so here are some of my designs.. some of them.. I have others :>D
Anyway without further ado .... These designs are on Spoonflower AND  Woven Monkey UK and the last picture was a contest entry on Spoonflower.. again, it didn't do so well.. but hey ho :<D


Thanks for visiting, I appreciate your curiosity :<D

Posted by Sylvie at 18:30 No comments: http://pinterest.com/sylviesfabart/

The Tortoise and Hare


Another week has flown by and I've just managed by the skin of my teeth to finish my design for the Tortoise and Hare contest on Spoonflower. I admit it was hard to come up with an idea.. but once I started it fell into place.

So without further ado.. here are a few close-ups for you to look at and as usual if you click the links under the photo's it will take you to the design.

Click on any of the links to see how it looks in repeat.     :>D
And a Portrait of the Tortoise....
And one of the speeding Hare....
I hope you like the design and pop along next Friday to Vote for it. Thanks for visiting!

Posted by Sylvie at 12:03 No comments: http://pinterest.com/sylviesfabart/

This week on Spoonflower, they're having a Limited Palette Design Challenge. The colours to be used are what they call Orchid, Navy and Burgundy with Black and white as optional extras. We have to use two of the first three colours and the design can be anything we're passionate about.

Well, that was hard because I love flowers, and the ocean and wild animals and ideas whirled around in my head for days. Then one day I was on instagram and saw some fabric of buck, done in Africa somewhere and an idea sparked. Those buck were so graceful and looked amazing. I knew I had to try and get my design to give others that same feeling.. I played with animal ideas and eventually came up with..... Elephants! Ta Da!! ROFL Really graceful elephants.. well it's not graceful by a long shot, BUT it's LOVING!
Yes very loving, Elephant Mama's and their babies :>D
Notice.. I don't have any Burgundy.......? Wonder Why?
It's because the Burgundy looked like Blood....
And I'm sure we all agree, there has been too much bloodshed with Elephants!


What it looks like in repeat as a fabric......
Not nearly as awesome or mind blowing as that fabric I saw.. But I think is rather sweet. I have it on Spoonflower in three sizes.. HUGE, Medium and small.

I've also put it up on Woven Monkey and Print me Pretty, if you can't see them when you click the links, it's because they haven't been made for sale yet..
Posted by Sylvie at 12:31 No comments: http://pinterest.com/sylviesfabart/ 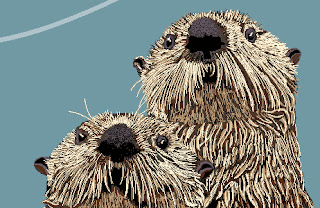 Close-ups of my Otter design for the Otter Challenge on Spoonflower. 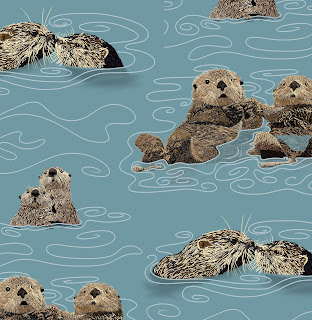 And this is the view of them repeated out.
Posted by Sylvie at 09:30 1 comment: http://pinterest.com/sylviesfabart/

It's been a Long Time and a Helluva Ride!

Hello, :>D  To anyone who is wondering what happened to me. I've been through a huge upheaval in my life and was in such a bad place that I just could not dredge up any enthusiasm to draw or to write. I don't know if any of you have been there, the place where you just want to hide in your room under the duvet and never ever have to come out again! The place where people look at you and seem to be thinking, get a grip man, what's the matter with you, you're stronger than this..... maybe they weren't thinking that, maybe that's what I thought they were thinking..... I don't know. All I do know is that I was broken......... into tiny little pieces ......... and it's taken me this long to even consider coming back here. I'm not sure that I'm altogether again just yet but I do know that I'm on my way out of the pit, this deep dark hole where the light at the top had disappeared but then became a tiny pinprick, then disappeared again but is now getting bigger and actually growing a little each day.

I found that by helping others it helped me find self worth again, helped me believe that I wasn't useless, worthless or ugly. Maybe ugly isn't the word I need here, ummm I think probably unattractive is more like it, because when you're told, out of the blue after ten years together, that you should leave because "I don't love you." What freaked me out was the missing 'anymore' at the end of that sentence. I began to wonder if I had ever been loved or was I just handy to have around? I was in such pain I went inside myself and existed on autopilot.
People offered to help, but got frustrated with me. They would, after a month or two, wash their hands of me and want me far away from them. Even close family weren't immune to this. I never used drugs of alcohol to drown my feeling of inadequacy. I tried to eat healthily, take walks, volunteered at the local thrift shop, and just make it through each day, barely managing to exist. I was pushed from one place to the next, not really wanted anywhere. Couldn't work due to visa restrictions, couldn't leave the country because my passport had expired and because it's Zimbabwean, it was almost impossible to renew outside the country. I eventually managed to get one.. but it cost me more than $600 to do it, money I had to borrow, not knowing when I could pay it back.

So that's it in short. I'm now living and working in the UK, due to my grandparents having been born here, and slowly finding myself again. I work as a carer to old folks and in my spare time I have started drawing again. I've paid my debts, bought an old skedonk of a car that has been amazingly good to me. I've managed to persuade my parents to move to the UK and they live with me now, which is awesome!

I wanted to show you what I've been doing lately.. I've started designing and entering Spoonflower contests again and these designs are what I'll be showing you all here.

Oh yes, I had to change my studio name from Art on Fabric to House of Heasman because some yoyo in Australia decided that Art on Fabric was a cool name and she registered it there so forcing me to change my shops names. :>P So now you'll find me under Pallet of Sylvie Heasman( PoSH) hehe on Woven Monkey and Print Me Pretty.  House of Heasman on Spoonflower, Zazzle and Society6. For some strange reason I couldn't use PoSH in the USA :>P

So I'm going to go back a few months of artwork and start there. Each post will show new work.

You'll have to click on the link under each picture to see it in fabric form... Thanks :>D

This is a cushion cover front which can be found on Spoonflower and Roostery. You can see it on Roostery by clicking on the cushion picture when you're on Spoonflower.
This last one was entered into a Hawaiian contest on Spoonflower.. didn't do too well.. but that's okay.

Have a fabulous weekend everyone.. <3 <3
Posted by Sylvie at 02:31 No comments: http://pinterest.com/sylviesfabart/

Other places I am

Other quilting sites I love

Translate into any language